In some areas of the Georgia Basin elevated concentrations of several contaminants, sometimes in excess of Canadian environmental quality guidelines, have been documented and environmental impacts have been identified. While the implementation of both voluntary and regulatory pollution control measures has been successful in reducing environmental levels of some contaminants (such as dioxins, furans and PCBs), elevated levels persist in some areas. For example, current levels of POPs present a continued risk, especially to some populations of marine mammals. Conventional and/or new POPs have been detected in harbour seals, otters, porpoises, dolphins and whales in the Georgia Basin. Resident and transient killer whales from BC coastal waters are considered to be  among the most contaminated in the world. 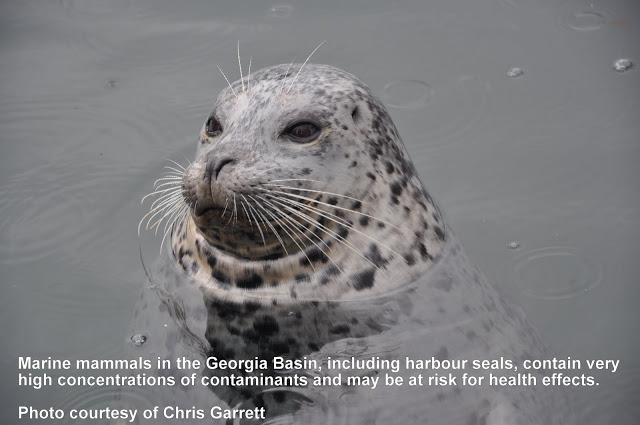 Areas with particularly high environmental levels of one or more contaminants are called “hotspots”. Hotspots for chemicals such as PCBs, PAHs, metals, and dioxins and furans in the Georgia Basin are most commonly identified in urban and industrialized areas. However, environmental contaminants can reach concentrations high enough to pose risks to environmental and/or human health in both urban and agricultural areas.

Adverse effects on environmental health reported in the Georgia Basin include:

The presence of contaminants in the Georgia Basin can also affect human health.  Elevated concentrations of both chemical contaminants and pathogens, such as fecal coliforms, have resulted in harvesting closures for fish and shellfish due to the potential for health effects on human consumers. For example, in the 1970s, mercury releases from a chlor-alkali plant in Howe Sound resulted in high concentrations of mercury in biota and led to the closure of Upper Howe Sound to the harvesting of shellfish and groundfish for human consumption (Harbo and Birtwell 1978a,b). In the 1980s, environmental contamination resulting from the release of dioxins and furans from BC pulp and paper plants resulted in closures on shellfish harvesting in approximately 1200 square kilometres of coastal waters of British Columbia. Closures of large areas of the BC coast for the harvesting of bivalve shellfish still occur periodically due to sewage contamination or to the presence of unacceptable levels of toxins and pathogens (both natural and human-produced). Surveys are conducted in coastal shellfish growing areas to ensure that shellfish harvested from these areas are safe for human consumption.

Current air quality has also been linked to potential human health effects. In addition, the projected future population growth within the Georgia Basin may increase the incidence and/or the severity of health effects due to increases in emissions associated with transportation and development activities.

In recent years, voluntary and/or regulatory pollution control measures have effectively reduced the release of contaminants to the Georgia Basin and many contaminant-related threats to both human and environmental health have been successfully addressed. However, available information for most contaminants in the Georgia Basin is not sufficient to document trends in concentrations over time; identify new and emerging issues; or measure improvements in environmental health resulting from the implementation of pollution control measures. In addition, the potential impacts of current concentrations of contaminants on local species, the various factors which can influence the potential of contaminants to cause adverse effects, and the potential overall ecological consequences of observed impacts are not well understood. Long-term coordinated monitoring programs are required to fill these information gaps, but such programs in the Georgia Basin are limited, particularly in the marine environment (Garrett 2010).

Link to References for this Section

More information on impacts of contaminants: